Synopsis: Kay Qobad is made king of Persia, and with Rostam’s help, they end Afrasyad’s invasion and Qobad rules for 100 years. 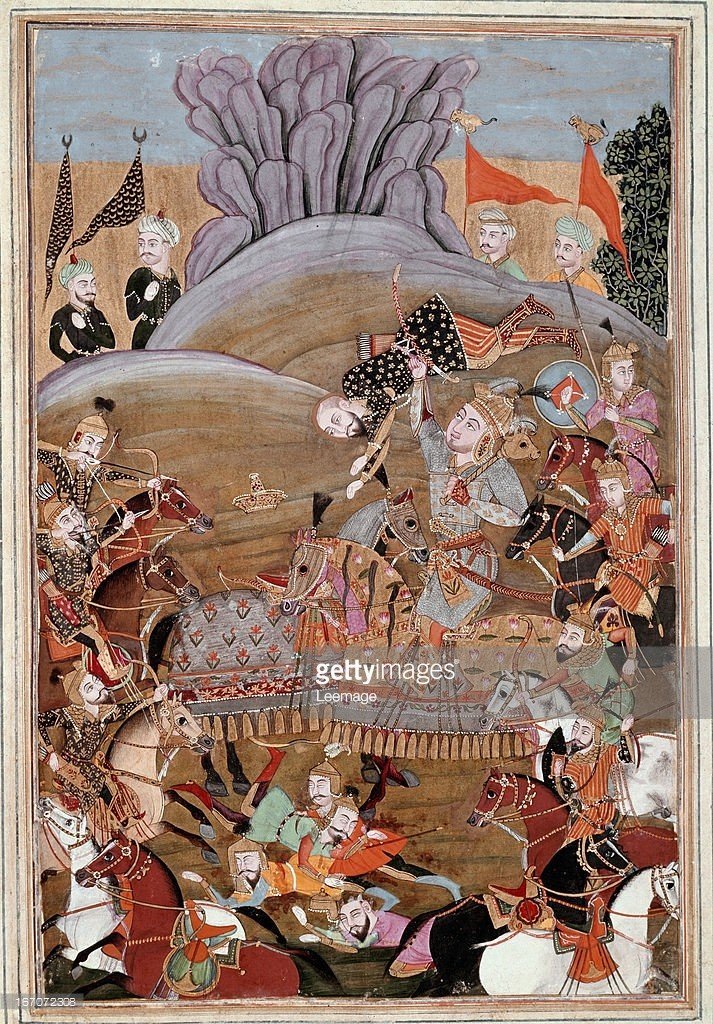 First of all, Kay Qobad is a great name. But I remain mind-boggled that Zal or Rostram even aren’t taking the throne. This story is really serious about farr and lineage – probably this is evidence of Zal’s honor and goodness that he refuses to consider it himself.

When Qobad is made king, I love this detail that he places the crown on his own head – after it’s suspended over the throne. He is not ordained or given the crown by a man’s hands (or woman’s or priest’s) but takes it as if from God himself. Very strong symbolism.

The description of the army is amazing! “the world was like a sea of pitch over which twinkled a hundred thousand candles!”

I’m a little in love with Rostam’s frustration at himself, though this is his first battle, so of course he makes mistakes: “Why didn’t I tuck him under my arm instead of hanging on to his belt?” LOL. This is a wonderful characterization moment.

It was interesting to me that previously Afrasyab was bloodthirsty and happy to be in this war against Persia, but then he’s nearly killed, and it changes his entire outlook on the war — he tells his father how it’s impossible to understand without being there, and that’s always been Pashang’s fault.

“Wherever there is a kingdom, there is warfare.”

This book is really teaching me to let go of timelines. Qobad rules for 100 years and the next section is his son’s rule… and Rostam is clearly going to play a part as a young, strong warrior, not old like Qobad. Even Zal is still alive.

Like you I am fascinated by this theme of correct kingship. Pashang and Afrasyab are also descended from Feraydun, just like Kay Qobad.

The text continues its exciting war stories, but now as you say we get to see Afrasyab change his tune. The arguments he makes to Pashang are quite interesting when contrasted with the idea of farr:

“You should renounce this ancient longing for revenge,” he argues, and goes on to point out that, “worse than this [deaths of many men], your name and reputation, which can never be restored, have been destroyed.”

At times I think some people may see this obsession with name and reputation as some sort of holdover from older days but don’t we see it playing out in modern media constantly?

Beautiful descriptions from this week:

I love that calligraphy is seen as this valuable and honored.

And, yes, what’s not to love about Rostam’s fight with Afrasyab? (see illustration, above)

Kay Qobad’s final speech is quite idealistic, in its way. Justice and generosity conjoined are the fulcrum on which a peaceful world turns.

Next week due to deadline hell we have to take another BYE week. But we will return on April 15 with Kay Kavus’s War Against the Demons of Manzanderan.

Previously: Introduction, The First Kings, The Demon King Zahhak, Feraydun and His Three Sons, The Story of Iraj, The Vengeance of Manuchehr, Sam & The Simorgh, The Tale of Zal and Rudabeh, Rostam, the Son of Zal-Dastan, The Beginning of the War Between Iran and Turan, Rostam and His Horse Rakhsh