This week’s portion: The Akvan Div

Synopsis: “An interlude in which Rostam defeats a pretty nifty demon and steals horses from Afrasyab.”

TG: This was pleasant enough, and nicely contained, though I remain more invested in Rakhsh than Rostam. BUT Rostam does continue to want vengeance for Seyavash and that endears him to me slightly.

The div is great, I thought, and I like how well he’s fleshed out. This is like a fairy story, really reminding me of some old Irish legends. The hunt for a beast who disappears and reappears and the choice given to Rostam how he should die, but of course only meaning the opposite of what he says, are staples of Irish and Celtic fairy stories.

I also note that Rakhsh did not warn Rostam when the Akvan Div approached this time. Rakhsh is learning. Too bad when he found shelter with the Turkish horses Rostam had to find him again. Rakhsh just can’t escape.

Surprise! Addressing! The! Reader! I’m glad it doesn’t happen very often since it’s pretty condescending in tone. “If you don’t appreciate this tale, it may be that you have not seen its real meaning.” I took this pretty personally, I admit.

I went looking for color images of the Akan Div, and found several: they stand out from the black and white image in our copy of Shahnameh because they HAVE GIANT SCHLONGS. Except one, which is actually coded female, with dangling breasts and more feminine curves instead of masculine shoulder-to-hip ratio and pec muscles.

The second image on this page: http://www.paaia.org/CMS/loc-persian-collection.aspx

(These all have artist credits.)

Possibly the exaggerated sex organs is because the Akvan Div is connected to the Aka Manah, one of the main demons of Zoroastrianism, according to my not-so-thorough wikipedia research, and this demon is a demon of sensual desire. (https://en.wikipedia.org/wiki/Aka_Manah) 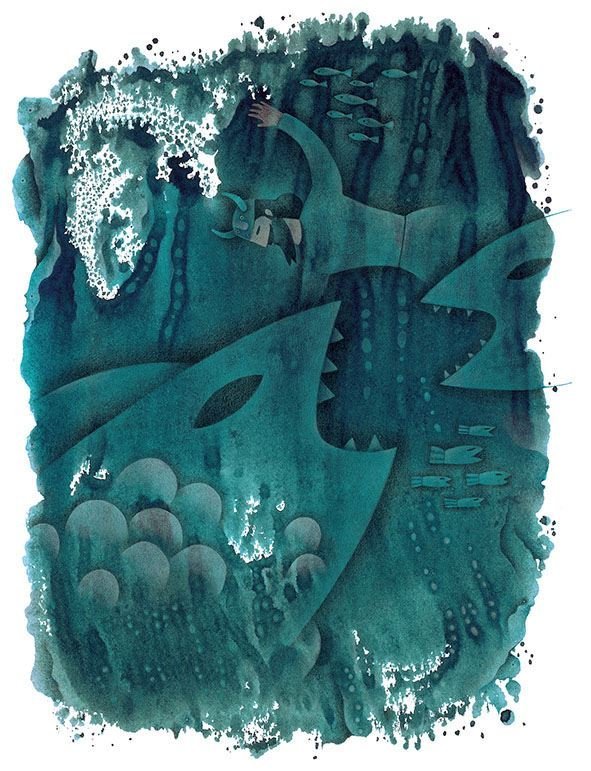 A gorgeous modern rendition of Rostam thrown into the sea by the Akvan Div. Artist credit: Sahar Haghgoo

KE:  I’m fond of stories where no one is surprised when unusual people and/or creatures appear. I love how Khosrow takes the herdsman’s complaint seriously and dispatches only the best to pursue the wild ass. Yet why appear first as a wild ass? I really loved the trick the Akvan Div plays on Rostam (when he’s sleeping), and I had a lot of sympathy for Rakhsh who it almost kind of seems is trying to hide from his master. But I’m probably only saying that because of my persistent annoyance with Rostam.

Again I note the emphasis on courtly graces and behavior, the gathering in gardens to drink but also for poetry and discussion. Even though these gatherings are inevitably interrupted by violence and war, they are still clearly depicted as what people should strive for since Ferdowsi’s mentions of “the world [being] filled with his justice and goodness” always coincide with the king presiding over a peaceful court. I have a book on Persian gardens that emphasizes their importance historically through the various eras, as well as the standard templates for garden architecture and flora. Also, the herdsman feels quite free to bring his complaint to the king personally, so there is an interesting mix of hierarchy with reciprocal degrees of responsibility.

I was bothered by Rostam killing half of Afrasyab’s herdsmen, seemingly at random (what did they ever do to him?), but I guess this is still setting us up for a later confrontation regarding Seyavash’s death.

As you noted, it’s interesting to get a glimpse of the authorial voice here, and especially the statement: “When a man leaves the ways of humanity, consider him as a div, not as a person.” On the one hand, one can agree with this with respect to norms of human decency. On the other, it is a very slippery slope indeed depending on how those in power decide to start defining what the “ways of humanity” are. But I think I am projecting my own background into the work here.

Finally, it’s also interesting to watch the secondary heroes cycle through. Last week a son and a nephew died, and Bizhan was introduced, and he appears here again in preparation for his greater role next week in what I hope will be a more cheerful episode.

Next Week: Bizhan and Manizheh