NIGHT FLOWER, the e-novella prequel to Court of Fives now has an exclusive soundtrack from Booktracks. Synchronized to your reading speed, you can now fully immerse yourself in an auditory accompaniment to the story. The track is available for $4.99 and compatible with iOs and Android. Check out the free preview and download the track today! 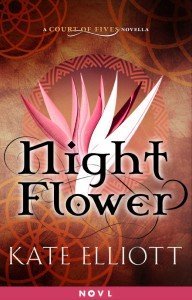 DESCRIPTION:
“Kiya is a commoner who has just arrived in the bustling city of Saryenia. Esladas is a member of the Patron ruling class and determined to prove himself in the army. His plans are disrupted by the outgoing and beautiful girl who sells him fruit in the market, though, despite the fact that neither of them speaks a word of the others language. Brief conversations and stolen moments together soon become something more, but when their divided cultures clash, Kiya and Esladas must decide if their blossoming love is worth becoming outsiders for the rest of their lives. Read the beginning of their legendary love story in this Court of Fives companion novella!”

This week we are again skipping over The Death of Rostam and continuing on with Sekander’s Conquest of Persia. Tessa and I, with the assistance of the able Renay of blog Lady Business and podcast The Fangirl Happy Hour, recorded a 30 minute conversation about our feelings about The Death of Rostam. We will post that for your listening pleasure as soon as Renay has edited it to her satisfaction so soon. Meanwhile, we forge onward.

This week: Sekander’s Conquest of Persia

Synopsis: “Sekandar invades Persia and defeats the king Dara in a series of epic battles. Dara is murdered by his own advisors, allowing Sekandar the entire imperial throne.”

TG: This section was very entertaining, and surprisingly heart-wrenching: first of all for how much I liked Sekandar as a character. He has a bit of the trickster in him, for how he goes to Dara’s court in disguise in order to judge Dara for himself and gather intel on the actual extent of Dara’s army.

Second of all, for the tension inherent in Dara and Sekandar being half-brothers. I didn’t expect them to find out, but I knew, and it stressed me out because of how tragically all previous episodes involving secret family members have gone. There WAS a moment I thought Dara might figure it out…when he recognized the disguised Sekandar as having farr and surely being from the same famous bloodline. (It was interesting a ruling king would admit another king might have the farr–seems dangerous to me, like it legitimized Sekandar’s claim and invasion, though I suppose one cannot deny farr.)

It was a great bit of story-telling in the very beginning how the narrative puts Dara and Sekandar in parallel but opposing roles as rulers: Dara rejects advisors when he takes the crown, but the first thing we learn about Sekandar is that he listens to the wise counselor Arestalis (I assume this is the same personage as Aristotle). It not only held up the brotherhood tension, but also put into place the characterization that neither of them is a BAD king. Though Dara is hot-tempered and arrogant, he treats his army very well and gives money to the poor. Sekandar seems well-loved, though we have less textual evidence of why so far.

Neither fights initially for entirely selfish or egotistical reasons: Sekandar doesn’t want to pay a tax for which he gets nothing in return, which I have sympathy for, and Dara is putting down a rebellion. Though Dara should’ve given up earlier for the sake of his army and people, and Sekandar seems genuine in his desire to resolve their differences peacefully, I can’t really imagine a true son of Dara’s bloodline surrendering. It’s not in their nature, as we’ve seen over 450 pages of story.

The death scene was very poignant to me — because I genuinely enjoy Sekandar for his trickster qualities and chivalry, and also because I’m never taught to dislike Dara. The image of Dara’s dying head on Sekandar’s thigh will stay with me, and I’m glad Dara’s traitorous advisors were executed. “It seemed his skin would split with sorrow” is an amazing line, as is “my part in the fires of life is now merely smoke.”

A final note: Though not yet as beloved to me as Seyavash, I feel like I’m really getting a solid idea as to Sekandar’s personality and I love what I see. He seems like a combination of the Persian heroic/kingly temperament and the only good parts of Rostam (his passion and willingness to play the trickster). Maybe if Zal had become a warrior king instead of a sorcerer he’d have been just like this. HERE’S HOPING SEKANDAR DOESN’T LET ME DOWN. KE: What a fascinating retelling of the story of Alexander the Great. First, I can’t help but note how in this version of the story the Persians claim him as one of their own people, thus giving a justification for his conquest of what is clearly the mightiest nation in the region at that time. Because Sekander is also the son of a Persian king (according to this origin story) then it’s also a form of destiny that he becomes king.

The history follows reasonably closely too, including the reference to Aristotle. Alexander’s trip to Egypt is mentioned. Three major battles are listed, and Dara (like Darius) is struck down by one of his own supporters and left to die. Alexander executed the man who killed Darius and afterward claimed that Darius had passed the crown to him. Also there is a mention of all the negotiations over the families of the court, which is a major part of the Alexander history/legend.

I also really enjoyed the characterization of Sekander here. He has all the typical attributes given to kings yet with that playful or trickster or slightly reckless attribute that causes him to pretend to be his own envoy in a really wonderful scene. The characterization of Dara also appealed to me, strangely enough. He had an immediacy and roundedness in being described as “young, fiery-tempered, quick to take offense, and his heart and tongue were hard enough to blunt a sword.” Probably this personality type is a little too appealing to me in the narrative sense, to my shame. When he raises the pay of his troops I have to wonder if this is a play to make sure the army remains loyal to him while the nobles (often jockeying for power in the court) can’t undermine him. But that’s just me. I mean, this is the stuff that epics are made of.

Like you, I was surprised that Dara and Sekander were always respectful and courteous to each other and never fell into what I can only call the dick-waving contest of, say, Esfandyar and Rostam’s famous interactions. In fact, they acknowledge they are related in the very touching death scene.

One last curiosity: Sekander’s army is described as flying “the beloved cross . . . embroidered in red” on its banners (together with a bird). Is this a reference to Christianity? In which case, an element out of time. I don’t know.

Next week: Either The Death of Rostam podcast OR part one of The Reign of Sekander