This week: The Reign of Yazdegerd the Unjust

Synopsis: “Yazdegerd is such a terrible king his advisors turn against him and try to keep his son Bahram from succeeding him.”

TG:  There was a lot going on here, more of the recent narrative taking stories that are familiar and shifting them or re-ordering the series of events to make something slightly new, but I have to admit I can’t really get past/over the very brief episode where our supposedly glorious, farr-blessed, wise and good hero tramples a woman he “loves” because she said something silly.

It WAS a silly thing to say, and a challenge that seemed designed to egg him on, not improve anybody or anything, but then he succeeds, shoves her off the camel, and tramples her. The episode just closes “after this, he never took a slave girl hunting again.” As if any slave girls would WANT to go hunting with him again!

It reminded me of “always leave a note” moment in Arrested Development because it’s such an over the top, ridiculous reaction/punishment to something trivial.

Like with Rostam and his horse cruelty, I just couldn’t get behind the notion that Bahram was a decent guy after this. Especially because he supposedly loved Azadeh (she even HAS A NAME!) enough to have a special saddle made so they can ride and hunt together.

(It wasn’t the only Rostam call-back: They make a big deal of Bahram choosing his horse, too.)

My favorite part of this section was the lake horse that kills Yazdegerd. I’m basically always on the side of the horse in the Shahnameh.

KE: I found a plate with the infamous hunting scene on it. 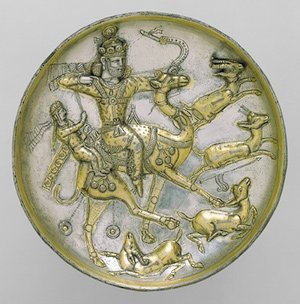 KE: Yes, I had the same reaction. After his treatment of Azadeh I just wanted to dump Bahram into a pit of sucking sand and listen to his helpless cries as I watch him sink and choke. Frankly his story (and the stories coming in the next section, since I have been reading ahead) strike me as being more sexist in their treatment and limited view of women than the legendary tales. Bahram has no relationship with women that isn’t sexual. He demanded to be taken away from the women’s quarters at seven in a speech ripe with condescension for his female caretakers, and all of his relationships here and into the next section are basically him plucking sexy young women for his wine, hunting, and pleasure cycle.

I also noted how he regained his throne: Sure, he is advised to speak wisely, but basically he says, “Look at all these great arguments for me to become a wise king and also by the way my army will kill all of you and lay waste to your land if you don’t accept me.” The crown and the lions is just a face-saving mechanism so the Persian notables and dignitaries who have worked so hard to make sure Yazdegerd’s son doesn’t come to the throne can pretend it was a divine working.

NOT mind you that I have anything good to say about Yazdegerd. Like you, I appreciated the white horse.

I guess Bahram is a reminder of how far the farr has fallen (see what I did there?), even from the reigns of Ardeshir and Shapur I (and even Ardeshir had his unpleasant behavior toward women).

I don’t know if it’s just that the book is so long or if the transition into the historical section loses something of the mythic tone and qualities that make the legendary section so fresh and delightful to read. Ardeshir and even to some extent his son the first Shapur still had some of that sheen but now it is wearing off for me as a reader and I am strongly feeling my anti-monarchy leanings rise to the brim once again.

Next week: The Reign of Super Sexist Jerk Bahram Gur

(we’re doing the entire long 56 page segment the better to get quickly past the Wild Ass <== what Gur probably refers to).