Synopsis: “Ardeshir rules wisely and makes many changes to the laws of the land. He also likes to kill the ladies.”

TG:  “When Ardeshir killed Ardavan and grasped the world in his fist” is a GREAT opening line to a story.

I’m enjoying how these episodes are taking stories and story-lines we’ve encountered before and giving them different endings or twisting them. For example: Ardeshir wants to see if his soul will respond to the sight of his son, so has 100 boys dressed up as look alikes. He has faith he’ll recognize him, but it also testing the farr and their royal connection. Given the tendency in the Shahnameh for fathers and sons to NOT recognize each other — to great tragedy– I am really nervous for Shapur who I haven’t even met. But this time, it works out. And then we do the same thing with Shapur’s secret son! Ardeshir recognizes his farr and lineage in the exact same way: through polo. Such a great storyline! And it plays on my emotions because I do not expect it to work out.

It’s interesting that Ardeshir fears someone will cast an evil eye upon Shapur when that’s so similar to the vizier’s fear that someone who is in enemy will poison his water. This new fear of the power of enemies to curse or slander is a culture shift, I think. Earlier, the power of an enemy was all about the sword. People made choices to hide secret sons or rescue condemned prisoners because of prophecy or stars, not because of a vague fear of curses. It’s as if magic has disseminated into the population, instead of just being the tool of wizards (I miss you Zal!) and demons.

We’re also getting more of these stories where farr and beauty mark a person royal even if they’re hidden among the peasants, “Like a tulip among weeds.”

It’s interesting, too, that Ardeshir makes so many thoughtful reforms, but really likes killing women. He wants to cut off their heads or hang them or, notably, burn them alive! “Interesting.” Mostly I mean that he’s clearly supposed to be a king we respect, and yet….

“Religion cannot do without the king, and the king will not be respected without religion” I wonder if this is true? I know they can build each there up, create support structures for each other, but to what extent can they survive without the other? We have evidence that religion can survive without a king just fine, but at least in the West, I’m not sure we can say the same about kings. Religious rebellion and changing philosophical perspectives is one of the things that leads to uprising against kings in western history. We rely upon the Divine Right of Kings, and without that divine right… why is the king the king? I suspect in the Shahnameh this is directly related to farr, and that only a person with farr can be king, and farr itself comes from God.

“That man who lifts a wine glass in his hand/In memory of the kings who ruled this land/Knows happiness” is going to be the epigraph of a book I wrote someday. Or short story. We shall see.

Here are a few brief notes I took down:

– It’s funny the note that Ferdowsi gives about brief accounts of uneventful kingships, when the one we just read about Shapur is really brief and uneventful, too. It was more like an epilogue to Ardeshir’s section.

– Self castration takes…balls. This entire episode delighted me.

– I’d like to know the protocols of wine drinking.

– We got a girl at the well story!

– “Scribes are the unseen rulers of the kingdom” can I put that on my business cards?

– I fear the reason we haven’t heard more from Golnar is because she’s dead, since Ardeshir really likes to kill the ladies. 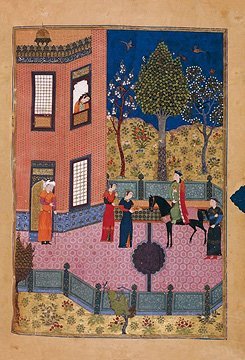 KE:  I am going to figure out a way to write a story about Golnar because I too want to know what happened to her. Or make up my own triumphant ending for her, because she is aces.

I love the girl at the well story, and even better, she is in fact the missing daughter of Mehrak, who is referenced and then to my excitement brought back into the tale in an important role. I am intrigued by how many women Ardehir’s story includes, because even if he does want to kill most of them (or discards the much missed Golnar), they are still there: his mother, the slave Golnar, Arnazad’s nameless daughter the poisoner, and Mehrak’s daughter. That’s a lot of women! And they all do such active things, which is what intrigues me most. Think about it: everything these women do in this section are all perfectly reasonable things for historical women to have done, and in the way they have done them and for the reasons they do them.

The girl in the well also matters to me because of its Biblical parallels. In the Bible, girls at wells drawing water for tired and thirsty animals are seen as desirable because of their compassion, while Shapur sees “radiance” and “signs of royalty” in her face. He actually says, “No peasant ever had a daughter as lovely and as bewitching as you are.” Which I don’t adore as a sentiment, but it is what it is, and yet at the same time, her father Mehrak is described as “low-born” so I don’t know what to make of that.

Shapur defeats the Romans (I love being in historical times) and then uses Roman engineering! Smart man.

Ardeshir’s reforms are really interesting and also fit a pattern. It feels like dynasty founders follow similar paths. In fact, these “discovery of the royal child amid ordinary children” stories are both reflections of a story from Cyrus the Great’s childhood, so I have to wonder if they got their start there or if, like the stories of Moses and Sargon being cast into the river in a basket as babies, they represent a kingly origin tradition tale. It does feel as if these warring conquerers then, once they’ve got theirs, turn around and immediately start working to keep it together by instituting a strong legal system and to keep their legacy untarnished by declaring themselves for justice, mercy, and other such reforms. I don’t know. But one does see it over and over again in the history of the world.

Now that we’ve entered historical times, people die at normal ages rather than 800. Onward into the Sassanian dynasty!