My Writing Year of 2016 & Looking Ahead to 2017: This post is only about writing/publishing. 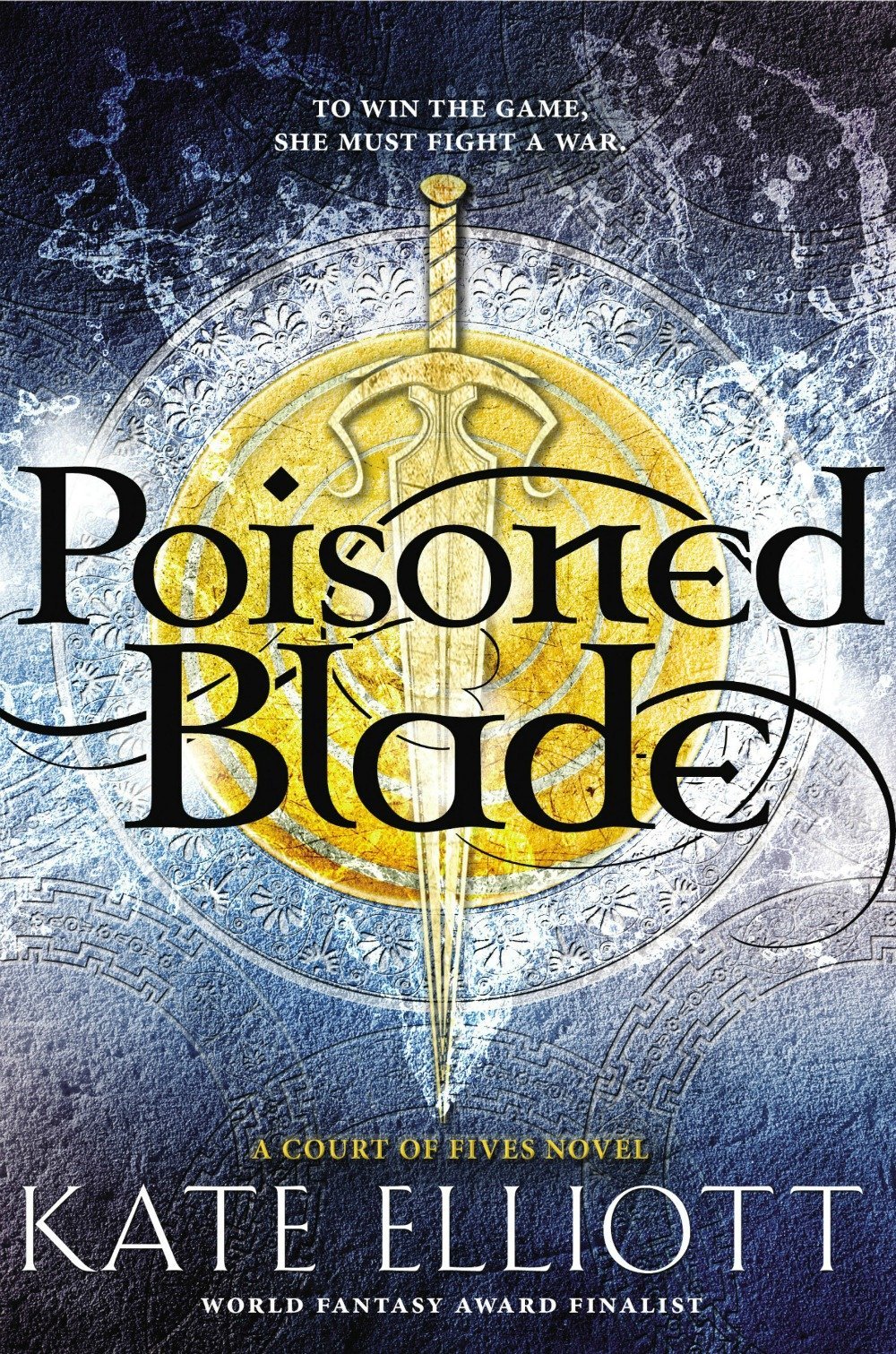 Cover of Poisoned Blade, featuring a dagger superimposed over a golden circle and the tagline “To win the game, she must fight a war.”

In 2016 POISONED BLADE: Book Two of Court of Fives came out in hardcover, ebook, and audiobook  (Little, Brown Books for Young Readers, USA, should be available worldwide). Court of Fives was published in a trade paperback edition (ebook and audiobook still available). Both audiobooks are narrated by Georgia Dolenz, who I think does a wonderful job making Jes sound determined rather than perky!

COURT OF FIVES has been named to the Tayshas and Lone Star 2017 lists of the Texas Library Association. It’s also on the South Dakota State Library Teen Choice list for 2016-2017 (Middle School). I mention these because library and school support for MG and YA novels is so important.

If you’re a librarian or educator, or have a book club, my publisher has made this Educator’s Guide available (they asked me questions and I answered).

Besides Poisoned Blade my most widely read piece published in 2016 has probably been the 9000 word essay, Writing Women into Epic Fantasy Without Quotas, which appeared on Tor.com in March. The title describes the content.

In a related post, Ken Liu and I published a dialogue at Lit Hub on the related subject of why the idea that it is unrealistic to show women in positions of power in epic fantasy still pops up with sad regularity. We don’t deal with the related claims that no one ever says this, even though examples can be found easily and often in the very threads in which people are claiming that no one ever says this.

Tessa Gratton and I read the Shahnameh: The Persian Book of Kings, by Abdulqasem Ferdowsi, and we wrote each week about the chapter we’d read. We were delighted and enthralled, at times appalled, and occasionally bored by this classic of world literature, and we will never get over the tragic fate of Prince Seyavash. It was such a fantastic project that in 2017 I’m going to do a readalong of the Chinese classic The Water Margin (Outlaws of the Marsh), although Tessa won’t be participating in this one. Charles A Tan and Ken Liu have signed on though, so this is an official thing now. I’ll be posting information on that on December 30.

I started a world-building Wednesday series, which I hope to continue as I have time.

You can find the Poisoned Blade blog tour list here if you’re interested in the posts I wrote surrounding the release of the book or want to revisit them.

Nebula Weekend (Chicago, IL), where Court of Fives was a finalist for the Andre Norton Award for Young Adult Science Fiction and Fantasy (Updraft by Fran Wilde won the award this year–huge congrats to Fran!)

BURIED HEART (Court of Fives 3, and the final volume of the trilogy) is complete and due for publication on July 25 2017. It is already up for pre-order. Don’t wait!

I wrote a novelette for THE BOOK OF SWORDS, an anthology edited by Gardner Dozois. No publication date set yet. The story is titled “I am a handsome man,” said Apollo Crow and it is set in the Spiritwalker universe.

I wrote a 100 drabble (it was actually 1120 words) as part of a fundraiser for Reading For Pixels, a short piece set in the Jaran universe. I hope to share this in 2017; I’ll keep you posted.

Dead Empire (Black Wolves 2): Yes, I’m working on it. I apologize that it is going so slowly. It’s a large and complicated plot, and I’ve added one more point of view character for a total of six. That is, there are two pov characters in each of the three plot-thread locations. The new pov character has been planned all along so this isn’t me changing my mind about things or going off on a tangent. Not that I can promise that will never happen but be reassured that this isn’t it!

YA proposal, TBA: Working on this and thus can’t announce yet. It’s space opera, not fantasy, and is intended as my YA follow-up to the Court of Fives trilogy. Not a literal narrative follow-up, that is, but a new series in the YA genre.

A 2nd Court of Fives novella: Working on this and can’t announce yet although I can tell you it will be about Bettany. But if you haven’t read Night Flower yet, please do so (if you’re so inclined). Since it functions as a prequel to the Court of Fives series you can read Night Flower with or without having read Court of Fives and/or Poisoned Blade. It works either way. And I’m particularly proud of how I sketched in the world-building in this shorter piece, trying to strike a balance between enough detail to give a strong sense of place and brisk pacing to keep the pages turning. 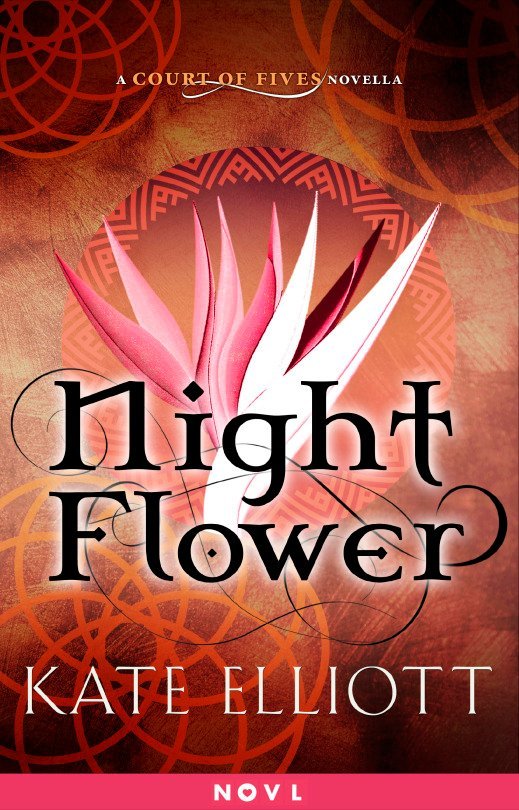 The cover of Night Flower has the title superimposed over a white and pink bird of paradise shaped flower.

Short fiction: I have several partially-written Spiritwalker short pieces I would like to finish, a short-short set in the Jaran universe that I owe to Mette Harrison (as part of a fundraiser), and a couple of possible projects I’ve tentatively agreed to write a short story for that don’t yet have contracts (that I know of).

Jaran 5: I have the opening of this written. I’m starting to wonder if I can find a way to write this story as a novella just to get it out there. At the moment I do not know when I will have time because I have other contracts to fulfill. Hermione’s Time Turner would be useful right now.

Other projects: Like almost every writer I know I have a number of potential projects and scraps of openings written, just waiting for that halcyon epoch when I can write everything that is waiting to be written. These include a book set in the Crown of Stars universe, 500 years later, an adult space opera (not set in the Jaran universe), and several YA fantasy ideas in the early stages of development. The cover for Buried Heart shows a silver-colored spider super imposed on a pale circle and blood-red background. The tagline (which my fabulous editor came up with) reads: “The end the war, she must choose a side.”

Upcoming 2017 events (this is only what is confirmed so far, not a final list):

ConFusion, Detroit, Michigan (how will I survive January in Detroit? By never leaving the hotel!)

Happy New Year, my friends and readers and colleagues. May you find art and support that helps you on your journey. As for me, I will as always try to stay on the road of justice and compassion.