A Japanese caretaker maintained the grounds of the base and served, I think, as a kind of general watchman. He had held the same position before and during the war. He also cultivated some garden plots and did some fishing as well. 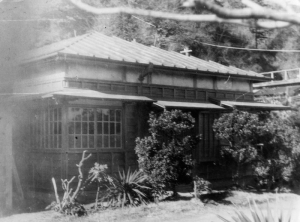 He and his family lived in a house some 50 yards from the signal tower. His family consisted of a wife, a grown son and a grown daughter. They were a very private family, meaning that they did not socialize much with the American occupiers. The two women took in washing for a limited number of sailors. In the early winter of 1946, when one of the sailors had accumulated enough points to return to the States for discharge, they offered to do my washing. I forget how many packs of cigarettes they charged me.

The daughter had fallen in love with a signalman who became eligible for discharge during that same winter. He made no secret of the fact that she was his mistress.

For her part, she believed they were engaged to be married and he would return for her soon. She sometimes asked us when we thought he would be coming back to get her. Not one of us had the impression that she was more than a sexual dalliance for him. I was embarrassed by her questioning. More than that, I remember believing him to be a calloused manipulator. It offended my small town, old fashioned and Lutheran sense of morality. The young woman’s feelings had been trifled with. She had been exploited and she was deeply unhappy. 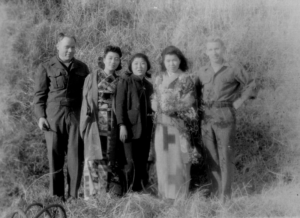 Gus and Gerry; a walk in the hills. Madame Butterfly is second from the right.

I no longer remember her name. But I remembered her vividly when I saw the opera Madame Butterfly for the first time, many years later. My old emotions were resurrected. She was Madam Butterfly.