That left a lot of time for playing. So the question is, “What did we do?” The first activity which comes to mind is watching movies. HECP had a jeep which drove into the main naval base which was some 15 miles away, and over a slow road. It made regular trips for the mail and to pick up movies. Those movies were shown every evening in the recreation room. We saw many movies several times. There were always a few to watch a movie. But we also became movie critics and did not waste time watching movies we did not like. There were always card games going on somewhere. A few enthusiasts played Bridge, endlessly. They did not welcome novices. Poker was more popular. It was conservative, old fashioned western poker: draw or stud, with neither jokers nor wild cards. We gambled with yen.

Shooting dice was also popular. Wherever played, floor or table, we tossed the dice up against a board from where they bounced back onto the viewing area. I think we believed that procedure minimized the possibility of cheating. Chess was a perfect time killer. A few of us played hundreds of games of chess, and kept track of wins and losses. The rec room itself. Note the ping-pong tables.

Fortunately the barracks included a recreation room large enough to contain two ping-pong tables which were used many hours a day and on into the night. We played both doubles and singles, and also kept track of wins and losses. It was really like a kind of continuous tournament or baseball league. It was serious business, intensely competitive. We became skillful players.

We also hiked a great deal, exploring the surrounding countryside. It was very hilly country and not densely populated. We found small patches of cultivated ground and isolated houses, or three or four houses clustered together where the people were uneasy about our presence. We learned something about intensive farming where every available square foot of land was utilized. Hiking. A village in the hills, inland from Kamoi.

Once, while walking in the uplands, I came upon a small group of Caucasian people. Both parties were very surprised. The party included a couple older girls. My friend and I wanted to talk a bit, but they were not one bit interested. We wondered who they might be. Later we found out that they were Russians, who had fled the communist revolution and gotten as far as Japan. On occasion, we would go on hikes with some of our Japanese friends and enjoy picnics together.

The kite flying hobby is described elsewhere, since it occupied our time for a few windy spring weeks. Other, briefer activities included an attempt to learn how to spear fish in shallow water which was a complete failure. We had borrowed spears from our Japanese neighbors in Kamoi. Once in a great while someone managed to acquire some ammunition for our carbines for which we did not have to account and we did some target practice in a quarry a short distance up the coast. The Japanese signalmen joined us a time or two. They were no better marksmen than we were. We did on occasion get a two or three day pass for longer excursions. The problem was that the cities of Tokyo and Yokohama were only barely being re-built and there was little to see or do. One or two trips usually satisfied our curiosity. The smaller city of Kamakura was only about 40 miles away and we all went there at least once to see Japan’s largest outdoor Buddha and the shrine park in which it was sited. 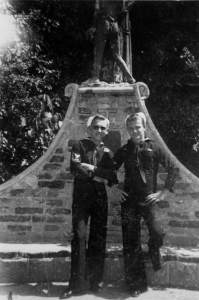 Gerry and Ben Cribb on liberty.

It was a good life. Remember, we were almost all in our late teens and very early twenties. We were just out of high school and we had grown up in the depression which allowed very little travel. In comparison, our life was an educational and maturing experience of significance. I finally saw through the strange and exotic culture and began to overcome the wartime attitude which had been instilled in us, and began to see the Japanese as other human beings. We liked our work and felt a certain pride in doing it well. We also never doubted that what we were doing was important to the Navy. I believe that those two years gave me a sense of self confidence which served as a foundation for the life which followed.

Let’s put it plainly in retrospect. I see my Navy career as one great adventure, one of growth and learning. I was never in danger. It was fun. It lasted for about 23 months.