Synopsis: “Rostam faces a variety of challenges on his way to rescue King Kavus, several of which his horse saves him from, receiving no thanks or praise for his efforts. The White Demon is killed, Kavus rescued, and Mezandarin conquered.”

TG: Kate warned me that in this section Rostam is kind of a dick, so I was prepared for arrogance and a certain level of dickishness, but must admit I was shocked that he was mean to his horse. It’s like kicking a dog, and basically, I’m out. It would’ve taken a lot for me to forgive him for that (and for starters, he should have apologized profusely or acknowledged that his horse was actually the smarter, more worthy of the pair). Instead, he continues to be arrogant and pig-headed and just leaps to conclusions, running around ripping off people’s ears (even if they are the servants of sorcerers that seems pretty extreme). Not to mention that song he writes about himself.

This section was pretty rough going for me because of a lack of emotional investment. Kavus brought this on himself and as yet I’ve been given no reason to care what happens to him, and Rostam is a dick. (I felt more sympathy for the king of demons, because at least he “grieved for Arzhang and the White Demon.” The entire episode devolves into a long whose got bigger balls battle in which everyone is a savage leopard, massive elephant, or ferocious lion, or all three, or one then the other, and it got a bit tiring. At least Rostam was briefly afraid of the White Demon, and I almost liked him for a second when he admitted that if he survived this battle he’d probably live forever. I’m not sure it’s supposed to be funny, but it felt like combating fear with humor.

I did enjoy the vivid descriptions thought, like the death of the White Demon and that the “learned doctor” suggested White Demon brains could cure Kavus’s blindness.

By far, the most vivid image for me was near the beginning when Rostam is so thirsty “the flesh of his tongue was split open.” SO graphic and visual I could feel it myself.

KE: Yeah. The horse. After an entire episode devoted to the finding and choosing of Rakhsh, and all of the horse’s superb qualities, and then Rakhsh SAVES the hero and gets abused for it, I was taken aback. I wondered: How am I supposed to see Rostam as a shining hero when he abuses his OWN HORSE? Zal would never have acted this way!

Like Tessa I could not help but feel some sympathy for the demons. That Ferdowsi bothers to mention their emotions and grief interests me; he could have simply written them as ravening savages, but he did not. And that leads me into more ruminations.

Are we meant to be critical of Rostam? Can he do no wrong and therefore any and all of his actions are right because he is fighting for what the story has already positioned as righteous (the king with farr)? How does this compare to Kavus, who engages in an endless series of actions in which he screws up, is forgiven simply because he is king, screws up again, and is yet again allowed to repent and then be the perfect leader over a world in harmony?

I have a lot of questions about this. I haven’t read any discussion of the Shahnameh but it must be extant. I must suppose that in a culture as literate and with as strong a sense of cultural history as Persia/Iran, there will be reams of references, reflections, and commentary. The idea of a righteous man righting for an unrighteous king because that is the order of the day is clearly a large part of the conflict here, and while I always saw Zal as playing the part of a righteous lord submissive to the king who maybe isn’t quite worthy of him, this episode made me doubt Rostam. Yet I must always be aware that I am bringing my own USAian expectations into the mix. When we have finished this readalong I am going to seek out more reading on this, and specifically (if I can find it in translation) Persian voices discussing their great national epic.

To close: the noble Rakhsh. We love you. 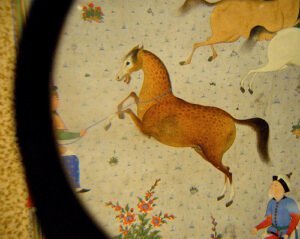 Next week: The King of Hamaveran and His Daughter Sudabeh

Previously: Introduction, The First Kings, The Demon King Zahhak, Feraydun and His Three Sons, The Story of Iraj, The Vengeance of Manuchehr, Sam & The Simorgh, The Tale of Zal and Rudabeh, Rostam, the Son of Zal-Dastan, The Beginning of the War Between Iran and Turan, Rostam and His Horse Rakhsh, Rostam and Kay Qobad, Kay Kavus’s War Against the Demons of Manzanderan