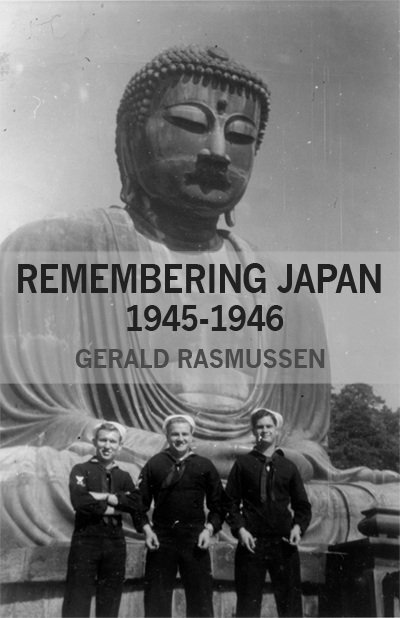 Title: Remembering Japan 1945 – 1946 by Gerald Rasmussen. Type is set over a black and white photo from 1945 showing three American sailors in uniform standing in front of the Great Buddha at Kamakura, Japan. My father is on the left.

From October 1945 to June 1946 my father, a Navy signalman, was stationed in Japan  at Toriga-saki by the town of Kamoi, at the entrance to Tokyo Bay. He was then nineteen years old, a young Danish-American man from rural Oregon. The experience made a profound impression on him and he spoke of it often.

In 2003 Dad traveled with my family (my spouse and three children)  to Japan to track down the places he had been. We found the pier and the site of the signal station and were able to visit other landmarks he had seen at that time including the Great Buddha of Kamakura and the Kofukuji (Five Story Pagoda) in Nara.

Chapter One: The Sea Devil to Japan

Chapter Fourteen: The Girl from Hiroshima

Chapter Twenty: Leave for the Lucky

Chapter Twenty-two: We Close HECP and I Go Home